Drupelets are white or tan.

White drupelet disorder (WDD) is a discoloration of some of the drueplets on developing blackberry fruit. The drupes appear as tan to white and can be concentrated in patches or randomly distributed on the fruit. The causes of WDD in blackberries are attributed to multiple factors. Environmental factors include the exposure of the drupeltes to ultraviolet-B (UV-B) light or high light intensities, low humidity, wind, rainfall, and interactions of these factors. WDD is often observed earlier in the fruiting season when the canopy is less dense. We know that there are some cultivars are particularly prone to displaying this disorder, so there is a genetic factor as well.  The blackberry cultivar Apache appears to be especially vulnerable. Here are some examples of WDD.

White drupelets on unripe fruit concentrated in patches. This is likely environmental.

White drupelets on ripe and unripe fruit. This is likely genetic (this cultivar often gets white drupes)

This reddening can occur after and before fruit is harvested.

After harvest. This disorder is called reversion, red berry disorder. Drupes are black at harvest and turn red after harvest. 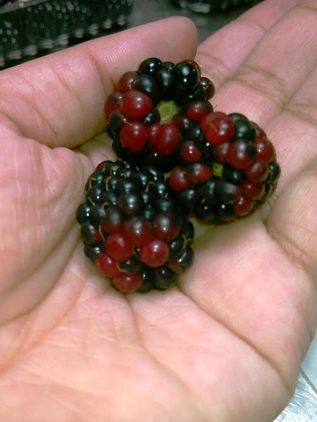